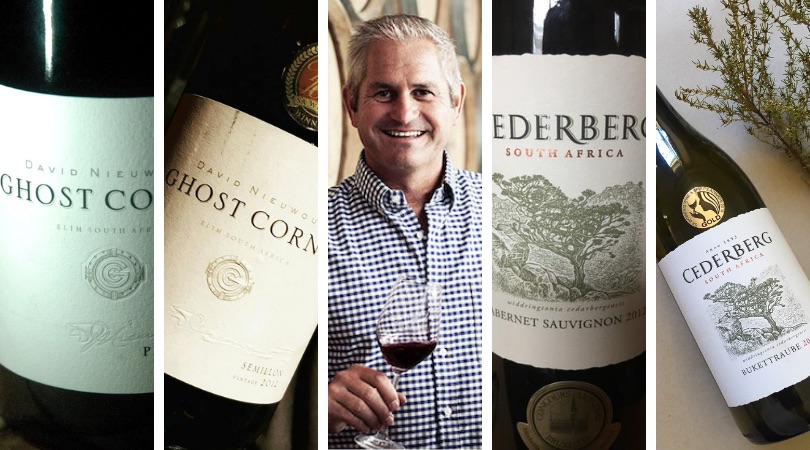 On 6 November 2021, Lanser’s on Main will be hosting one of South Africa’s most awarded Wine Makers, David Nieuwoudt, for what promises to be one of our most memorable Wine Pairing evenings.

This wine pairing evening is a little more expensive than usual, as we’ll be tasting more wines than we normally do, of which the vast majority will be Premium Wines. It’s sure to be an evening to remember.

Lanser and David will be pairing wines from both Ghost Corner and Cederberg.

A LITTLE BIT MORE ABOUT DAVID
Having completed his schooling in 1990, and then studying at Elsenburg Agricultural College, in 1996 David took over the winemaking reins from his uncle, Oom Flippie Nieuwoudt. Three years later Cederberg Private Cellar was awarded a 4,5-star rating in the 1999 edition of the Platter’s SA Wine Guide – for a Chardonnay. Today, these Chardonnay grapes are being processed for a vintage Méthode Cap Classique. In 2004 the Cederberg Shiraz 2002 won the award for the best red wine in South Africa. During 2008 the Cederberg Shiraz 2006 was awarded an International Trophy for the Best Rhône-style wine above £10 in the world at the annual Decanter World Wine awards. On two occasions Wine magazine has placed Cederberg Private Cellar among the top 10 wine farms in South Africa. These are a few of the awards and accolades bestowed on David.

David keeps on entering new wine worlds and adding interesting work to his day. The Chilean project with his friend Julio Bouchon, namely Longavǐ, just added three more wines: a 75% Cabernet dominated blend call Mabo as well as the two GLUP wines – a skinned fermented Chenin and an old vine Cinsault. David also consults a young winemaker, Martin, in the Swartland who calls his wines Marras. Then the five Ghost Corner wines remain, as well as the two Five Generations wines, three wines in the Driehoek range (Cederberg), three for The Berrio (Elim) and two for the Waitrose Foundation in the UK.

WINE PAIRING EVENINGS
Our Food and Wine Pairing evenings are well known for delicious dishes, paired with incredible wines, drawing out exquisite flavours from every course. During the evening Lanser and David will briefly explain and describe why each dish was paired with each wine.

It promises to be an unmissable event

The extreme and mysterious landscape at the southernmost tip of Africa has been the inspiration for the Ghost Corner wines. More than 130 ships have found their last resting place in these treacherous waters where compass readings show no deviation between magnetic and true north and navigation was just about impossible on dark and stormy nights.

Inland from this dramatic coastline, in the Elim Ward, lie the vineyards where David is making the most of excellent growing conditions, cooling southeasterly breezes and extreme climate. The deep lime-rich soil with plentiful slate and gravel deposits give rise to the exceptional Ghost Corner wines – Semillon, Sauvignon Blanc, Wild Ferment Sauvignon Blanc, Pinot Noir and The Bowline. A range of wines that linger on the palate, evoking a sense of mysteries past. 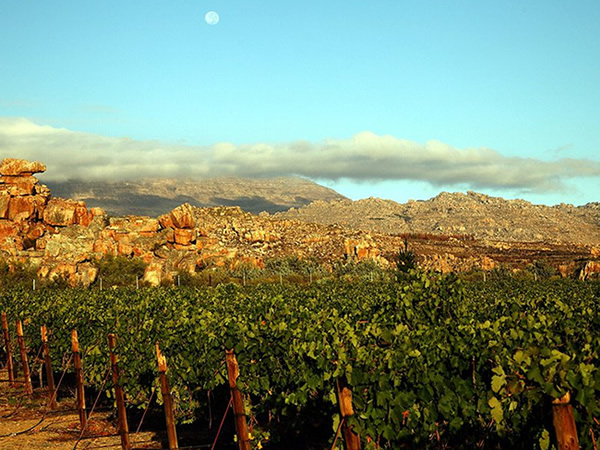 The farm itself lies in the Cederberg Wilderness Area and only 66 ha are under vine. Today, this award-winning winery is owned by David Nieuwoudt – proudly fifth generation. Emma, David’s daughter, is the sixth generation. Many stories have been told about ‘how it all started’. Maybe the first Platter’s guide to South African wines (1980) puts it best: ‘Oom Pollie has confounded the experts by producing prize-winning wines on his farm high in the remote Cederberg Mountains.

He first started making wine for the farm workers with table grapes that ripened too late to be taken in by the nearest co-operative. The venture was so successful, he decided to try his hand at making red wine, and the first vintage in 1977, though too small to be certified, was acclaimed by experts as being up to Superior standards’.